Self-compassion as an antidote to self-criticism. 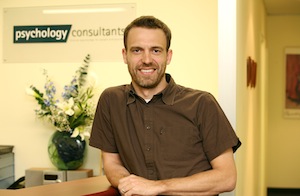 By Dr Stan Steindl
“You stupid fool!”
Boy, if I had a dollar for every time I said that to myself I would be the proverbial rich man! Rich in money, but not rich in terms of my sense of self. Self-criticism can have devastating effects on our mental health. We can be so generous to others with reassurance, logic, compliments and forgiveness, but when it comes to ourselves? Not so much. Why do we do it?
Professor Paul Gilbert from Compassionate Mind Foundation in the UK, answers this question by saying, “Well, you see,” (you have to imagine a Derby accent flavoured with something acquired during American International schooling as a child), “you have a very tricky brain!”
He went on to elaborate, and I think it could be summed up a bit like this…
Our modern brains are the product of thousands of years of evolution. Over the majority of those thousands of years, one of the primary roles our brains have played has been to keep us safe. We have this highly developed threat system that is all about “better to be safe than sorry”. So the brain is constantly on the look out for threat or danger, even preferring to err on the side of seeing danger when it may not actually be there. Better to be safe than sorry, right?
We also have a well-developed drive system. This is the part of our brain that is highly aspirational and seeks food, sex, excitement and pleasure. And this is where you often see a conflict. Imagine the early humans walking along through the forest. They hear a rustle in the bushes. Part of their brain, the threat system, rings alarm bells and warns, “That could be something that’s going to eat me!” At the very same time, another part of their brain gets excited, “That could be something I could eat!” The first leads to fear and an urge to run, the second leads to excitement and an urge to approach.
So, what’s all this mean about me saying contemptuously to myself, “You stupid fool!” Well, bring the brain into this 21st century, and I have a modern version of this same conflict, both the drive to be successful and the fear of my imminent failure. I’m torn, and immobilised…you see? A stupid fool!
But here’s the next problem. Somehow or other, we have developed an assumption that this highly self-critical part of ourselves is going to help us, motivate us, and make us more worthy. On the flip side, we fear that without self-criticism we might become complacent, lazy, and make mistakes. Lets put this to the test.
Can you think of something you feel self-critical about? Maybe, just to begin with, something mild. Try to imagine what your self-critic looks like. Bring their image to mind. What is the self-critic saying to you? Perhaps it calls you names, puts you down, or points out all your weaknesses. How does the self-critic sound? Maybe their words come out harsh or mean. What does the self-critic feel towards you? It often seems contemptuous, disdainful, and angry.
Now…how does all that actually make you feel?
You see, this idea we have that the self-critic is somehow going to improve us just doesn’t stack up. Much more commonly, the self-critic leaves us demotivated, hopeless, sad and small. What’s going on here? Well, some of that answer can be found if we look at what’s going on behind the self-critic. And that turns out to be the conflict between threat and drive…and fear.
The self-critic is the modern brain’s answer, though perhaps misguided, to the fear we feel about this conflict between threat and drive, failure and success. If self-criticism were a car, then fear is its engine. Fear drives self-criticism. We can’t attack self-criticism because this will only escalate the fear and therefore escalate the self-criticism. We need to find ways to create a calm, safe, and contented state of mind to soothe the fear.
The good news is that evolution has cleverly also provided for this. Humans, as vulnerable as we are, needed to develop a soothing system that helped us to care for our young, look after one another, cooperate in groups and generally survive together in what was a world full of dangers. Everyday we treat others around us, especially those we love, with kindness, care and compassion. The opportunity we have is to develop that same kind of compassion for ourselves.
Self-compassion is the answer to self-criticism. It is that ability, within a state of calm, and with a friendly voice, to reassure ourselves that this is not our fault. We are a product of evolution and the brain is indeed tricky. We quite naturally feel worry and fear, anger, sadness, guilt, shame and self-criticism. We have evolved this way, even though it may be less useful today. So we can forgive these feelings, accept that they might be there, recognise that they will come and go, and develop this compassionate self that, when we think, “You stupid fool!”, responds with:
“Hey, you’re doing ok. You just have this tricky brain. You’ll get frightened sometimes, or angry. You’ll even be mean to yourself. Just breathe, smile, connect with the present moment, and remember all that you are, as part of this common humanity, and keep going, bit by bit, in the direction you truly value.”
For more information on Dr Steindl and the team of Clinical Psychologists at Psychology Consultants, visit www.psychologyconsultants.com.au