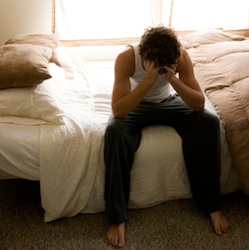 John is 43 and divorced from his wife five years ago. He visited Psychology Consultants and mentioned that he had been chronically unable to sleep after his divorce. John reported going to bed early and watching television in bed. He admitted to worrying about his sleep loss all through the day and assumed that ‘something bad’ would occur to him if the problem of loss of sleep continued.
John’s case is common. One in ten people report the issue of Insomnia sometime in their life – often as a result of some event. A few of the contributors might be:

Over-stimulation from intake of stimulants like caffeine or tobacco at night or late exercise
John started going to bed early to make up for his loss of sleep, a strategy which most people adopt. But, instead of associating bed with sleep, he had started to combine it with other activities, such as watching TV.

The main contributor to John’s lack of sleep was perhaps his worries about this condition.

During therapy, we advised that John use his bed only for sleep or intimacy, and get hold of a relaxation technique which ensures sleep.

John understood that his technique of going early to bed heightened his problem. If we sleep for a long period of time, it tends to break more often during the night and makes us feel tired in the morning.
With the help of psychologist, John also learned to modify his belief about sleep that something bad would occur if he failed to work on his sleep. Consequently, this resulted in creating less worries, and improving his sleep.
Eventually, John’s sleep became better in a matter of few weeks of therapy and practice of new set of useful sleep strategies.
Before bed:

If you can’t sleep or have been in bed for more than 15 minutes without falling asleep at bedtime or during the night:

If you think you could benefit from our group sleep therapy programme, visit the Towards Better Sleep page because  together we can take steps towards change. #believeinchange