Many of us from time to time have turned back to our house or car to check if we have locked or have wondered if we have left the iron on only to find later that these concerns were unwarranted. We also from a young age play out some superstitious beliefs by not walking on the cracks in the pavement, not walking under ladders or taking our lucky pen to our exam.

Unfortunately, a small percentage of the population (estimated 1-2%) experience significant difficulties in tolerating uncertainty. Locking the door and leaving the house in the morning for example can create significant distress and anxiety that it feels impossible to leave as they think they cannot be 100% certain and if something bad happens they will be blamed. This type of behaviour that generates significant distress and anxiety, which then goes on to interfere with a person’s day to day functioning, is often diagnosed as Obsessive Compulsive Disorder otherwise abbreviated to the acronym of OCD.

Obsessive Compulsive Disorder refers to a cluster of symptoms such as anxiety, negative and intrusive thoughts which are the obsessions and compulsions frequently demonstrated in behaviour or some type of undoing ritual. For example, someone with OCD may have the thought that they have touched something that can lead to contamination. In an effort to reduce this distressing thought, they will compulsively wash their hands. The problem is, the more they wash their hands, the more they reinforce the thought that something bad may happen to them as they never collect any other evidence to the contrary. To put it in simpler terms, despite having red raw hands, they often don’t get sick which they attribute to the hand washing ritual rather than a normal experience. When they do get sick, this will often increase the hand washing ritual.

Paul Salkovskis, a well-known psychologist in the field of OCD often refers to the sufferer as having an exaggerated sense of uncertainty and an emphasis on the concept of responsibility. Performing a ritual will then go to reduce their level of distress but it is only temporary until the next negative thought occurs. Sufferers also commonly think that if they have a thought about something then this can possibly be true. Another researcher in the field of OCD (Rachman) referred to this concept as ‘thought-action fusion’. So for example, if I think that I have run someone over on my way home despite no external evidence, this may then be true. I then will feel compelled to check.

OCD can happen in all shapes and forms. It doesn’t discriminate by age, social status, gender or education. Some individuals have such distressing thoughts often expressed in sexual, religious or violent forms, that they believe they are capable of committing some heinous act and they are too afraid to speak of these thoughts. Others may get stuck for hours performing one ritual. Families and relationships will often suffer. Jobs are sometimes lost. There is often a sense of intense shame experienced by the sufferer and many suffer in silence.  There is help for OCD and you don’t need to suffer in silence.

Many people with OCD respond to psychological therapy with the occasional assistance of some medication that may be prescribed by their GP or a psychiatrist. Therapy basically consists of reinforcing a healthy way to think and gradually decreasing compulsions which allows the individual to understand that often something bad does not happen if at all.

If you think that you may be suffering from OCD or anxiety, maybe it is time to speak to your family and GP and raise your hand for some assistance.

Remember…just because you think it, doesn’t mean it’s true.

You may find useful facts and resources at Beyond Blue https://www.beyondblue.org.au/the-facts/anxiety/types-of-anxiety/ocd 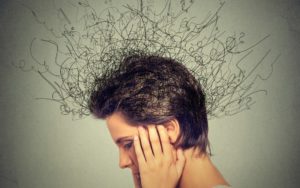 When we are stressed or dodging one of life’s many curve balls, it’s common to become obsessed with the subject matter and it can be hard to stop thinking about it. Also known as obsessive thinking or rumination, the mental merry-go-round can be difficult to get off, it’s metaphoric dizziness often interrupting sleep and inducing stress. It has also been known to lead to anxiety and depression. Similarly, those experiencing depression or anxiety, commonly ruminate and their experiences may present in what is often described as ‘catastrophic thought’.

Although it’s normal and sometimes even helpful to ‘workshop’ problems or decisions you’ve made, when there is no solution in sight and the thoughts are becoming obsessive and interrupting daily function, you’ve almost certainly tipped the scales to an unhealthy level of rumination.

Obsessive thinking has been known to lead to depression and anxiety as the negative thought increases the brain’s stress response leading to higher levels of cortisol. It also leads to dangerous physical symptoms of stress like high blood pressure and heart problems.

So how do you short-circuit obsessive thoughts?

The first step is to recognise when you are thinking this way and to know where to draw the line of healthy vs unhealthy rumination. This is the most difficult step as people prone to rumination see it as ‘workshopping problems’ rather than brooding badly! If you find yourself reacting irrationally to the present, it might be because your mind is elsewhere, perhaps dwelling on negative thought. Regularly checking in with yourself and understanding your own individual signs will help you recognise the signs of rumination.

Being mindful and present can also help you let go of past decisions and actions that cannot be changed. Practicing yoga can be a positive way to physically commit to mindfulness, as the ancient art focuses on being present and grateful for the now.

Exercise is a known distractor when negative thoughts are overwhelming you. Walking with a friend or socialising can also be helpful in shifting the focus to more positive and enjoyable experiences.

As cognitive behavioural therapy is focused on stopping negative thoughts in their tracks and replacing them with more positive, helpful ones, it’s world renowned as one of the most effective treatments for alleviating cognitive distortions. A Psychologist can help guide you through the process of breaking down these thoughts and perceptions and how these may affect your emotions and behaviour.

If you need help with obsessive thoughts or your general health and wellbeing, Psychology Consultants has a large team of experienced, male and female Clinical Psychologists committed to helping you thrive.